Our website is open for orders from June to August 31, or until Sold Out 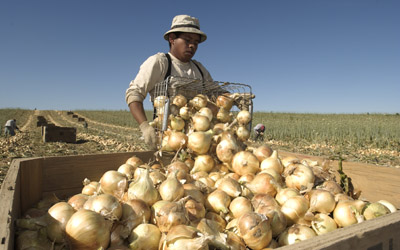 Each harvest season begins in mid-June and continues until mid-August or until sold out. Locati Farms hand selects only those Walla Walla Sweet Onions that have that perfect color, shape, and texture.

The mild taste of a Walla Walla Sweet Onion is not due to sugar, but rather a low sulphur content, which is half of an ordinary yellow onion.

Walla Walla Sweets are a good source of Vitamin C, are sodium free, contain no cholesterol and only 60 calories.

Do not store whole onions in plastic bags – the lack of air circulation reduces storage life, a basket or mesh bag provides good air circulation. Do not store onions with potatoes or other produce items that release moisture. When kept dry and cool or refrigerated, onions can stored for 3 or more months. Chopped or diced onions can be frozen for future use.